An Entrepreneurial Journey - Our Visit to Area 071

The visit to 'Area 071' proved to be very educational and enlightening as we, a group of students from Edinburgh College collaborated with The Dutch Foundation of Innovation for the visit. As a segment of their project 'Welfare to Work', we had the opportunity to visit the start-up facility in Leiden. Area 071 is a unique office space for start-up entrepreneurs and freelancers.

The space is 7000 square meters of office space which isfilled with desks and office spaces that are all available to rent. The rent islow to give startups the opportunity to work without the worry of extra costs hanging over them. The rent is kept down through working with partners and companies who subsidize part of the rent. There are roughly 75 desks in Area071 they also have many conference rooms that are available with the cost being 2 euros per person, per hour.

They also have a small movie theatre perfect for giving presentations to around 50 people. Area 071 is home to around 140 permanent entrepreneurs and startups, with up to 300 working at anyone time. It is one of the biggest startups in the Netherlands, and it is still expanding with a waiting list of up to 6-7 months for office space.

During our tour we received two presentations given by a duo of entrepreneurs; Bart Hoenen and Roel Gielkens. Both started out as inexperienced entrepreneurs and have since grown to develop several companies each. Some were successful and others not. However, as they spoke, it became apparent that their failures have only aided their development. 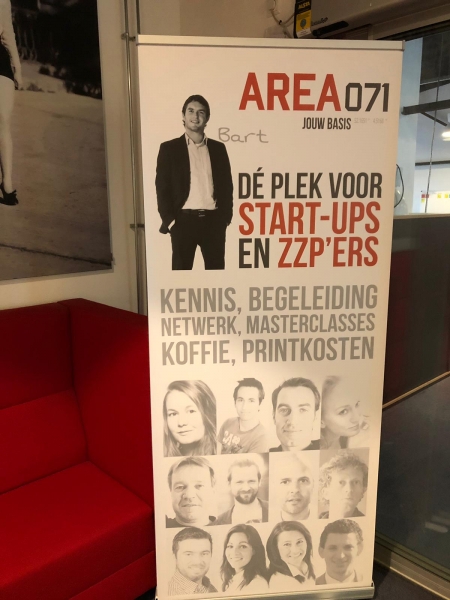 At 41 years old, with an active homelife, Bart introduced himself as having had many careers over his life time. From being an office manager to social work with people in homeless accommodation and juvenile offender units. After working in these areas, he then - in what he described as a questionable financial decision - bought a house whilst living off a severance package he received prior. Not long after he came across a gap in the market for an inflatable bounce house rental services and invested u20ac100,000 into his new venture. The business ultimately proved costly, and he struggled to make a return on his initial investment. Bart made the decision to split the company and make it a partnership, resulting in a wider audience and customerbase. Although he had made the hasty decision to invest a large amount into his first venture, he admitted that he doesn't regret the decision, having learned from the experience.

"If you have a dream, if you wantsomething; you have to take a risk."

Following his success, Bart moved on to work for various football clubs' marketing departments, such as Rangers FC. He achieved this role fromthe relationships he had built networking. Through working with Rangers FC, hewas introduced to many other valuable contacts which expanded his network andallowed him to progress to work with other clubs.

At one point, he confessed he had lost over u20ac1million, and indicated that "Professional football is a jungle." He emphasized the importance of likability and trust within business. This showed me that the cost involved was unparalleled by the charisma he held in tandem with the relationship he had established. This has been emphasized by Pieter Van Schie throughout our stay, that the brand of 'I',is such an influence upon business. He ultimately conveyed the importance of relationships and effective risk taking through this example.

"A vibrant community, vibrant entrepreneurship and a place where everything and everyone met."

IIn 2012 Bart partnered with Arjan Master as a business partner to create Area071 and has created a work/life balance that accommodates his position, new ventures and family life. As Area071 has grown into a 70-person open workspace Bart finally has time to put his children and cats first.
Bart emphasized an entrepreneur should never be a one trick pony. He is constantly creating and trying out new projects, for example a clothing brand, Rambostijl. The concept of which, is based on altruism. Bart wants to pass on the message and brand with a part of the proceeds going to charity.

Bart has numerous businesses and projects he's consistently developing. These businesses go fromcalculating real estate with Kadax, to helping like-minded entrepreneurs in Creative Invest. Above all, Bart has stuck to one of his main rules of "never be a one trick pony."

"never be a one trick pony."

Roel GielkinsOwner Sowieso Events & Gielkens Search & Recruit
Roel Gielkins is an up and coming young entrepreneur who is running many successful businesses out of Area 071. In 2011 Roel founded his own recruitment agency, confident in his business plan he named the business after himself - Gielkens Search & Recruit. He believes his failures help form his big successes.

After the initial success of his first company, he was asked by his partner at the time if he knew of any nanny agencies as her friends were students looking for flexible employment. Roel and his friend made a quick business plan within twelve hours and then went and pitched it to investors. During that week they went and registered it to chamber of commerce (KVK) and began the business. They had a group of students who were ready and available to work. The issue was the price. They were charging a fifty-euro retainer fee for clients plus an additional charge whenever the service was used. Pretty quickly it became clear that the business wasn't attracting enough clients due to the pricey retainer fee. Eventually, with their business dissolved, Roel moved forward into other ventures.

"I want to change theSkyline."

Today Roel still runs Gielkens Search & Recruit from Area071 alongside his new business venture SowieSo, a party business. Roel noticed a gap inthe market for student club nights in Leiden. With a massive student populationin the city and no student night life, he knew that he was on the right track to creating a successful business. Roel organised his first student club night in a small café in Leiden, covering windows with towels to block light and clearing tables to create a dancefloor. The night went down well, and he realized that this concept was something Leiden needed badly. Despite setbacks, such as hosting an event which sold no tickets, Roel has turned his student night concept intoa booking agency. Sowiso now throws parties in the biggest cities in The Netherlands, flying in Dj's and artists from across the world to perform at their events in Amsterdam, The Hague and Rotterdam.

What we Have Learned

I found the visit to Area071 very interesting as welearnt a lot about how two different entrepreneurs started their journey andhow they got to where they are now. I learned that when being an entrepreneuryou are going to make mistakes which you are going to have to learn from andhopefully never do again. Also, after making these mistakes picking yourself upand moving forward instead of dwelling on past projects. Overall it was veryintriguing, and I learned to always have more than one idea and open yourhorizons in the entrepreneurial world.

The visit to area 071 was my interesting in my opinion.I found it very interesting to talk to entrepreneurs who have their own startupcompanies and the different businesses they have. I thought that the way theywere open about how some of their businesses had failed and that it's notnecessarily a bad thing and you should learn and grow from the mistakes. I alsofound their approach to finding new business interesting as sometimes thingsjust happen and come along on their own.

Throughout the visit of area 071, parallels betweensuccess and failure have become apparent to me.

The instances of longer-term success can be observed inthe cases of Bart and Roel and for me, the reasoning behind this has been dueto their experiences of failure and their consequential development thereafter.Their ability to take calculated risks and then to learn and develop fromwhichever outcome seems to be the corner stone of their entrepreneurial skillset.I've found this experience to be invaluable, to speak to those who have workedon some of the most original projects is truly inspirational. Bart had listedhis own rules throughout his presentation and help us with the 'rule' "ignoreother people's rules", to make our own rules and we all enjoyed the irony amongthe inspiration.

The main lessons I gained at area 071 is you never knowwho is in that building, sitting next to you or in the next room. I walked inwith the idea I want to go into football marketing within 5 minutes of ourpresentations I found an unlikely contact who has been successful in thatindustry leaving with valuable knowledge I will now need to take into mystride. I also learnt not to fear failure but to welcome it and take thepositives out of the negative and failure is only a bump in the road and notthe end of your journey.

I found it really inspiring to visit Area 071 and seethe work spaces of so many entrepreneurs and how the Dutch work. I also foundit really interesting that Area 071 is an area for entrepreneurs which is theentrepreneurial journey of co-founder Bart. It was incredible to listen to thediverse journeys of both entrepreneurs and listen to how although they may havehad disadvantages along the way they have arrived at a very exciting point intheir career and motivates me to trust my instincts and learnt that failure isnothing but a learning curve.

The most important point I took away from our visit atArea071 would be how important it is to create relationships and build yourpersonal brand. Bart and Roel both spoke about the downfalls and setbacks theyexperienced, however, using the relationships they built withinvestors/business partners they managed to grow from it and managed tomaintain successful connections. The quote that both Bart and Roel mentioned -"Never be a one trick pony" has really made me think. I've never taken intoconsideration that only having one business idea/focusing all your time intoone project could hinder your entrepreneurial journey. It's always smart tohave a business to fall back on if another doesn't turn out the way you hoped.Having another project to focus on keeps that fire burning inside of you andjust creates another path to your adventure. 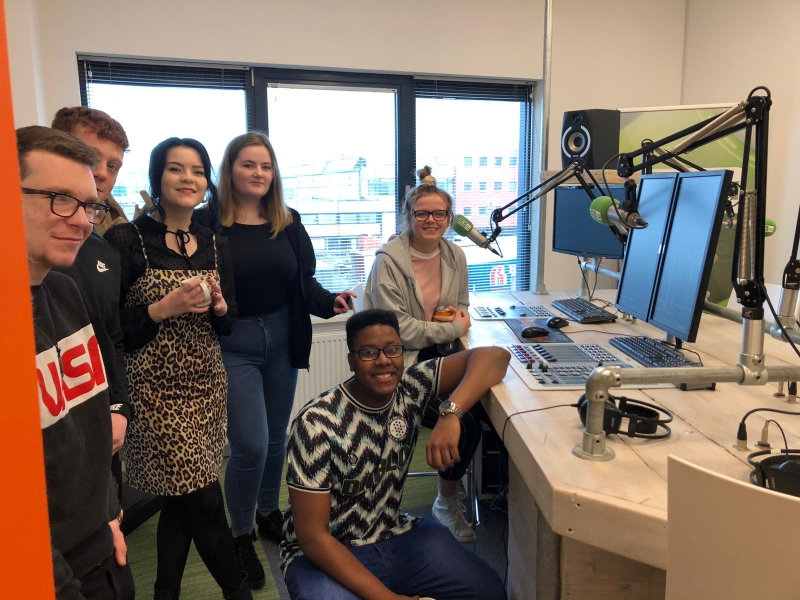 An Entrepreneurial Journey is a new international programme from Young Enterprise Scotland and The Dutch Foundation of Innovation and is funded by Erasmus Plus. For our first programme six students from Edinburgh College have spent 3 weeks in The Netherlands learning from entrepreneurs, living and working independently and delivering real life assignments for Dutch businesses.