Afternoon Tea, June 2, 2017: Hollie Simpson, ShaniceHanton, Nicole Lockhart, Maryann Patterson and Jemma Fairley organized an Alice in Wonderland theme afternoon tea which would take place on Friday 2ndof June at 12pm in the Georgics Bar, George Square. This was done to raise money for their chosen charity, SAMH, Scotland's Association of Mental Health.The group came together to organise all aspects of the event, including funding, marketing, legislation, decorating. The group also organized a pub quiz fundraiser that would help pay for the theme and decorating the afternoon tea, we hosted this at Dow's Bar on the 9th of April and raised£119.

On the day: The event was a success with20 guests arriving at the Georgic's Bar to receive afternoon tea in aid of SAMH. They were served a selection of sandwiches and cakes with the strawberry tarts being a huge hit of the day! Guests were entertained with the Alice in Wonderland album playing lightly in the background. Rebecca Paton was our winner for the Alice in Wonderland theme quiz, which resulted in a 3 way tie with each person scoring 5 and a half points! Gillian our guest speaker from SAMH kindy joined us on the day and shared some information with our guests on the type of work the charity does and what they can expect their donations to go towards. We managed to raise an amazing £370 and were delighted to have had the opportunity to be involved in raising awareness of the charity. 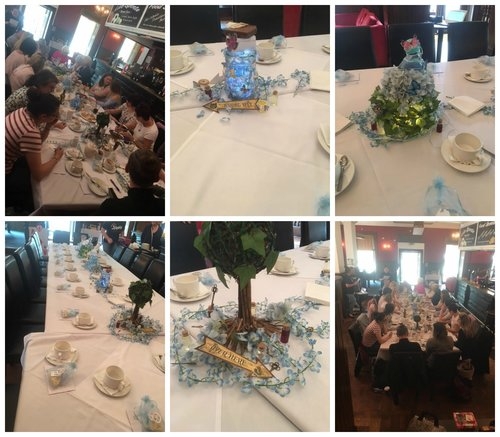